Walks In The Old Ballpark 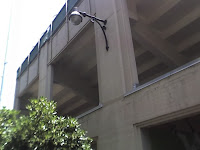 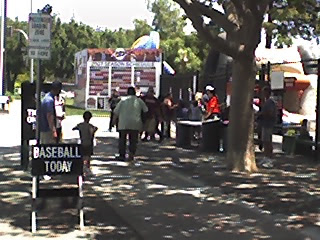 May 27, 2007: San Jose, Calif.
Stockton Ports 9, San Jose Giants 6
It turns out that I am better at wandering than sticking to hockey. In this case, at loose ends on Memorial Day weekend, I wandered down the 880 to San Jose. I will spare readers the paean to minor league baseball, as you have undoubtedly seen it before, but the Single-A experience in San Jose is distinctive. Number one: Municipal Stadium is old. Minor-league owners have been just as effective (maybe more effective) as major league owners at extorting taxpayers for new stadiums, complete with luxury boxes and the whole yadda yadda yadda.
San Jose's civic leaders are probably more susceptible than most to throwing money at desperate attempts to attract status symbols, but the California League isn't what they have in mind. I think the Athletics' planned move to Fremont also casts doubt about the future of the minor league game in San Jose. So, at least for now, 65-year-old Municipal Stadium abides.
I wouldn't say it's particularly architecturally distinctive, but it does have something of a vague Mission style. The best thing about it is that it is utterly unDisneyfied, in contrast to most new facilities. I was really taken with the interior concourse. The walls are lined with painted pennants of minor league teams present and (mostly) past. There are murals and displays outside the stadium tying together the history of pro baseball and the history of pro ball in San Jose. It's low-key but classy.
The other key ingredient to the game experience there is the barbecue area by the third base line. It's a large-scale operation, with a bunch of picnic tables nearby and its a treat to go early get some barbecue and a beer (good selection at reasonable prices by pro sports standards).
Unfortunately, there is no shade anywhere at the stadium, at least anywhere you can see the game. It was only in the mid-70s, but the San Jose sun was relentless. And what kind of idiot goes to a day ballgame and forgets his ballcap? That would be me. So, I confess, I left early. In my defense, I watched two and a half hours of baseball, though that only worked out to six innings, because the pitchers had trouble finding the strike zone, and infielders had trouble finding the ball. As for #18 of the Ports: they need a baseball version of the shot clock for pitchers like him.
I'll make one baseball observation: even a casual fan like me can see how thoroughly the Athletics (the Ports' parent club) teach and apply the Moneyball patient batting philosophy.
Local color: Adobe sponsors the pitch speed sign.
Hokey Minor League touch: Forget dot racing: the San Jose Giants do horse racing by having horse-head cutouts, carried by some staffer below, "race" above the outfield wall between innings. Very old school!
Game reports here and here.
Posted by hockeywanderer at 8:38 PM