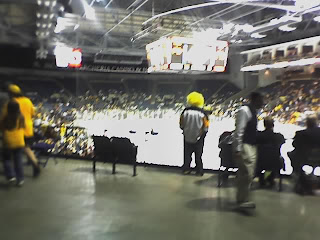 Has it really been five weeks since I watched this
game? And four since I promised to blog about it?
Luckily, it was a memorable evening. After cancelling plans
for a longer getaway, I found a fun alternative,
Hockeywanderer style -- a lovely afternoon spent
meandering through the Delta, followed by some playoff
hockey. After an al fresco dinner at Valley Brew -
friendly staff, excellent beer, edible food -- we went
down to the Stockton Arena.
Now, Hockeywanderer is fond of places with quirks, with character, with local color. That's not what you get at the Stockton Arena. You get a late-model, state-of-the-art sports arena experience, as one would expect from a franchise and venue controlled by the IFG Group.
That has good aspects (cleanliness, wide concourses, adequate restrooms) and less-good aspects (relentless, loud CrapRock played during every break in play; robotically frequent fan exhortations on the p.a. and scoreboard.)
The Thunder are in their second season, and rewarded their numerous fans with their first playoff berth. This was their first home playoff game. The Thunder drew a pretty good-sized crowd, which is not always a given in the minor leagues.
The Game:
Five years from now, the winner of the 2007 Kelly Cup will be largely forgotten. But the players in this contest fought with every bit as much heart as a player fighting for the Stanley Cup. It was a taught, hard-fought contest, and the intensity was palpable. I thought the Thunder showed a little more flair, but aside from one scoring play, they were unable to finish. Their goaltender was spectacular.
The Steelheads for their part looked thoroughly well coached. This struck me as an excellent demonstration of how to be successful in the AA minor leagues, where teams are less likely to have players with game-breaking individual talent (since such talent would likely get promoted). Idaho played a flawless positional game -- they were not often caught out of place and were consistently in position to keep the Stockton attack from building. As I write this, Idaho is playing in the Kelly Cup finals and I am not one bit surprised.
The Atmosphere:
As I noted, IFG does not let a second go by during the game without some kind of stimulation provided

for the fans. I might bring earplugs next time, just for the p.a. system. It looks like a lot of Stocktonites have taken to their hockey team -- caring enough to make sign supporting their team and, evidently, rookie Troy Bodie. Many wore bright yellow wigs, which makes sense -- because, to me, the sound of thunder evokes the sight of bright yellow fake hair.
They proved very vocal in their opinions of the refereeing -- especially after the ref blew the whistle after losing sight of the puck during a scramble that appeared to have led to a Stockton goal. This resulted in a loud, thunderous chants of "You Suck, Ref! You Suck, Ref!" This caused Mrs. Hockeywanderer to look at me in a certain way, as if to say, 'So, these are hockey fans, and you are a hockey fan, and therefore...'
Anyway, the fans were quite emphatic in their criticism of the officiating, even though I am confident that 90% of them had never seen a hockey game before Dec. 10, 2005. This including the 10-year-old girl who enthusiastically soloed on the "You Suck Ref" chant regularly through the third period and first overtime. Classy parenting!
Value proposition: This was actually my second Thunder game and it won't be my last. Sixteen bucks for good blueline tickets to a pro hockey game is a screaming deal, well worth the drive from the Bay Area. The cheap seats start at $9 for adults.
Confession: As a general rule, real fans stay to the end of the game. I declare an exception when one is: A) not a true fan of either team and 2) 80 miles from home. As overtime began, I said we would stay for one overtime (my hockey senses smelled multiple overtime) and that's what we did, so I was on Highway 4 when the winner was tallied.
Doing things right: The main beer advertisers are Fat Tire and Sierra Nevada. That IS classy.
Hokey Minor League touch: A few lucky fans were called to the ice for intermission musical chairs. This was flat out hilarious! They had to wear helmets, and they needed them too; those people were vicious competitors.
Game reports here and here.
Posted by hockeywanderer at 9:40 PM